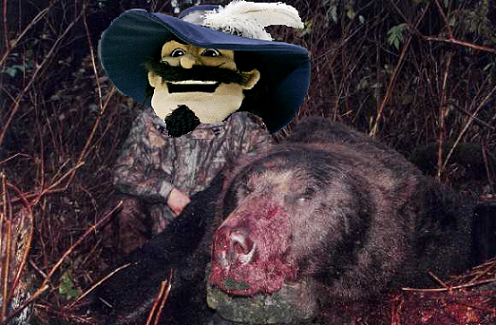 Well, the day is finally here.  As has been the case in many previous tournament games, the Muskies are the underdogs.  I didn't really think this could be possible, but apparently UC's win over Florida State to make the Sweet 16 was the first time in school history that they beat a higher seeded team.  That's pretty wild.  I'm curious how many times Xavier has done that.  I may have to check some numbers and post that next week.
On to the matchup... Baylor is unbelievably talented. They've lost a total of 7 games this year, and 5 of those 7 have been to Missouri and Kansas!  Also scary, they are 7-1 at neutral site games this year.
They have 5 guys who score 10+ points per game and they all bring a lot to the table:
Pierre Jackson 13.5 pts, 5.8 ast
Perry Jones 13.4 pts, 7.7 reb
Quincy Acy 11.5 pts, 7.2 reb
Quincy Miller 11.0 pts, 4.9 reb
Brady Heslip 10.3 pts, 46% 3-pt %
As you've probably heard, Heslip hit 9 three-pointers in the last game vs. Colorado.  That's scary.  As good as Baylor looks, they aren’t flawless.  Their defense can be suspect at times.  In their last 5 games, they’ve allowed 46.5 FG% and 34.1 3pt %.  Compare that to Xavier’s D over the last 5, allowing just 40.1 FG% and 28.4 3pt %.
The factors for XU to win:
Can Tu continue to pour on the points when we need someone to score?
Will Frease or another big man deliver tonight to off-set Baylor’s talented paint players?
Can the Muskies continue to play great defense and smother Heslip from 3?
Will someone unexpected provide a big boost for the Muskies a la Davis vs. Lehigh?
Can the Muskies hold their own on the glass and minimize Baylor’s second-chance points?
I know this is a lot to ask of the Muskies.  But, it is March and anything could happen.
Let's take down the Bears! GO MUSKIES!!!