Posted by Josh on Tuesday, April 10, 2012 Under: Muskie Recognition 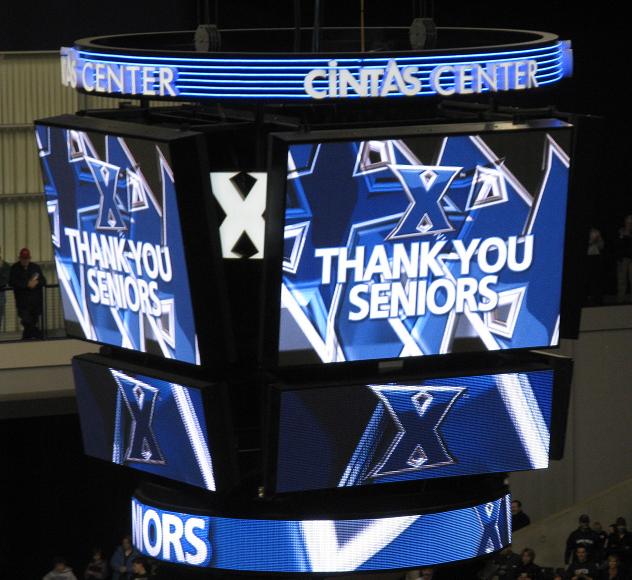 Well, I kept putting this off...I was trying to forget about the loss to Baylor and probably trying to avoid coming to the realization that the season is over.
The season certainly was a rollercoaster. Seven games into the season, I didn't think the optimism could be any higher for Muskies fans....then as we watched Xavier build a huge lead against UC at Cintas, an 8-0 record and a 20 point win over our rival was undoubtedly going to be boost our confidence even more…
Then of course, the fight broke out and all that optimism and confidence went out the window. Our top 3 scorers and the 3 guys that can drive to the hoop were suspended. A huge amount of the remaining games were called much tighter by the refs, which was not the style of play that benefited this team. Not able to play as aggressive as we're accustomed to and likely licking our wounds from the losses when Tu, Lyons, and Wells were out, the Muskies were out of it for several weeks.
In early January, Chris Mack injured his knee practicing with the team before the game at Fordham and had to go to the hospital. The season was seemingly ready to spiral out of control but the Muskies rallied to win 4 in a row. At 4-1 in the A10, it seemed as if the Muskies could be back on track. But late January through February saw XU trading wins and losses in A10 play. Although the conference was stronger this year than most, some of the losses were due to the Muskies inability to gel and play to their talent-level. The losses at Memphis and at St. Louis were particularly deflating as the Muskies led in both but folded down the stretch.
Our tourney hopes were not looking good. Then on Senior Day vs. Charlotte, Kenny Frease and Tu Holloway stepped up and played huge in the final home game of their careers. The Muskies went on to win a back-and-forth game against Dayton in the A10 quarters and then beat St. Louis in the A10 semis. (By the way, congrats to Dayton for losing in the opening round of the NIT at home!)  Although XU lost to St Bonnie in the A10 finals, their 3 game win streak when the stakes were high was enough to get them into the tourney with an at-large bid. As an underdog to the Irish and playing into the the first hour of St. Patrick's Day, the Muskies pulled off the win. They then beat Lehigh as Kenny Frease took over the game and brought Xavier to its 4th Sweet 16 in 5 years. We played a very talented Baylor team for a chance to go to the Elite 8. We started off horribly and then made it a game but ultimately lost. It's a shame that we didn't have a healthy Dez Wells and Andre Walker to give Baylor our best shot. But no sense in thinking that way. It is what it is.
We got to see a great group of players this year.  Tu Holloway and Mark Lyons were a great guard tandem and Wells showed flashes of excitement as a Freshmen.  And there is much to look forward to this fall.  Wells and Lyons will get to showcase their abilities as the top returning scorers.  While we will miss Tu, Kenny, and Andre, we have some exciting, talented guys coming in to step into their shoes (more on them in the coming weeks).  Thanks for joining us this year and a special thanks to Ron for helping out with the site. I'm looking forward to covering several different topics during this off-season and have some website updates in mind as well.  Hope to see you again!
As always....Go Muskies!
-Josh