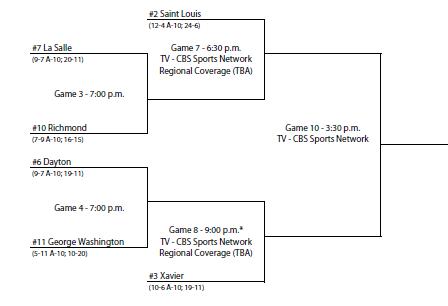 I've pasted above just the bottom half of the A10 bracket.  The rest of it only matters if the Muskies win Friday and Saturday.  (Go to the "Info on your Muskies" page to see the full bracket)

For what seems like the millionth time, we could be playing Dayton in the A10 tourney....since Dayton plays 10 times harder against XU than any other opponent, I'd rather not play them in the postseason.  But a win would feel pretty good.  If Dayton does beat GW on Tuesday, this game Friday would be a bubble-buster for sure.  The loser of Dayton/Xavier will not be going to the NCAA Tourney.  The winner would still be alive.

Get well-rested Muskie fans; this upcoming weekend could be nerve-racking!  Go Muskies!