Basketball is back this week! 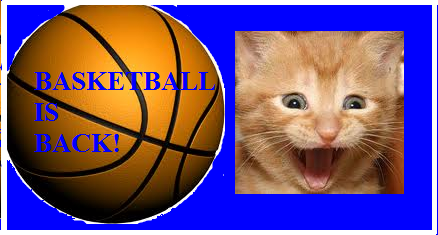 WOOHOO! Saturday at 7pm, the Muskies play an exhibition game with Kentucky State.

Last week, in a closed-doors scrimmage with West Virginia, the word is that Semaj Christon and Dee Davis played well and that the Muskies led most of the game but lost by a few points in the end.

At guard, Brad Redford will play plenty as he, Davis, and Christon are the only scholarship guards on the roster this fall.

Isaiah Philmore is not eligible to play the first 3 regular season teams due to a NCAA rule because a form wasn't filled out listing him as an amateur before he played in a summer league while a player at Towson (which was now 3 years ago or so). Yes, it's a ridiculous rule. He should be eligible to play in this exhibition but given that he'll be out the next 3 games, I expect Mack to give the other big men ample time on the floor Saturday. James Farr and Erik Stenger should log minutes in the paint as well. Still no ruling from the NCAA on whether Chris Cantino will be eligible this season so I wouldn't expect him out there.

It will be fun to see how Coach Mack utilizes the new players and we'll finally get to see the team in action in a real game. Can't wait! Go Muskies!