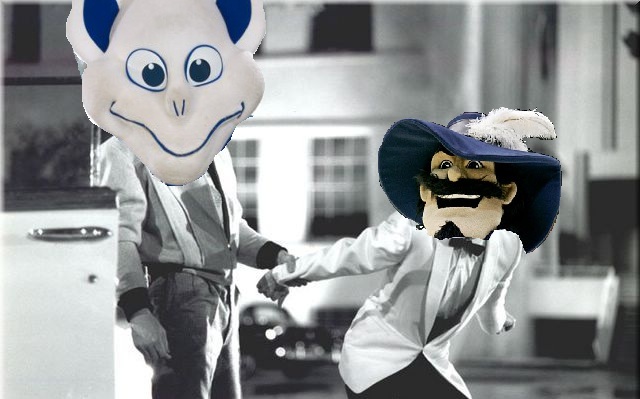 Revenge is sweet, but pan seared Billikin is delicious. Xavier has not had much luck against SLU this year losing 2 of 2. Today Mack's Mighty Muskies get another chance for redemption. SLU is seen as a tournament lock having big wins in the early part of the season and closing out the conference 12-4. Obviously if XU wants to dance they have to knock out St Louis much like George McFly knocked out Biff Tannen in Back to the Future to get into the dance. Conklin and Mitchell are the two leading scorers for SLU with the former a dominant inside threat and Mitchell and sharpshooter from behind the arc. If Xavier wants to win they will have to again rely on the poise and leadership of Tu and Frease. This should be an epic matchup as the Muskies are riding the momentum of a clutch win against Dumpster diving Dayton. The battle begins at 3:30 EST. Game can be seen on CBS Sports or heard on 550KRC http://www.iheart.com/#/live/1709/?autoplay=true

To cheer on our beloved Muskies are Josh and Goo, slugging it out in A city! Wish them luck!