Favorite Muskies of the past 10 seasons - Brian Thornton

Posted by Josh on Friday, October 3, 2014 Under: Muskie Recognition 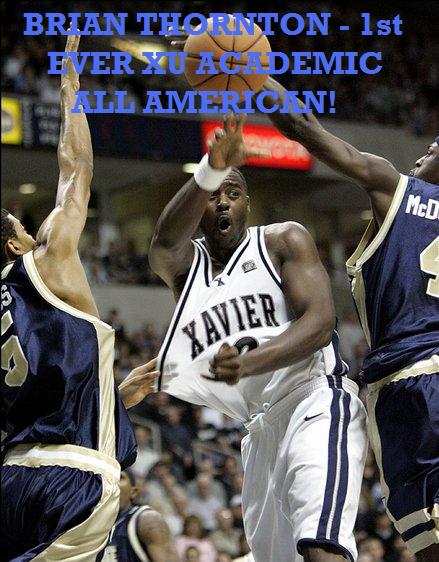 There have been a lot of smart, team-first players over the years at Xavier. One of the best examples has to be Brian Thornton. The big man transferred to Xavier after 2 years at Vanderbilt. He made a big impact as a Junior, averaging 10.7 pts and 5.8 rebs per game. He was a model of consistency his Senior year (2005-2006 season), going for 15.3 pts and 6.8 rebs per night (both led the team) before rupturing his ankle near the end of the season in an Atlantic 10 game against LaSalle. I remember how bummed I was that Thornton was out. The Muskies rallied after Brian's injury and made the NCAA Tournament. To jog your memory, they were (in my opinion) screwed over and given a #14 seed, to play out west against Gonzaga, narrowly losing to the whiny Adam Morrison and his squad.

Thornton has the record for best field goal percentage over 2 years at Xavier, at 61.9%. His Senior year, he shot 64%, 1st in A-10, top 10 in nation. Now that's efficient!  Maybe, most impressive, he was named ESPN The Magazine CoSIDA Second Team Academic All-American, the first Xavier men's basketball student-athlete to earn Academic All-American honors. He also earned Atlantic 10 Conference Student-Athlete of the Year and Academic All-Atlantic 10 both years at Xavier.

Brian, after being on Xavier's coaching staff for 2 years and then Winthrop's for 2, is now Assistant Coach at Ball State under former Xavier Asst Coach, James Whitford. Thanks for the good memories and best of luck to Brian and Ball State this year!