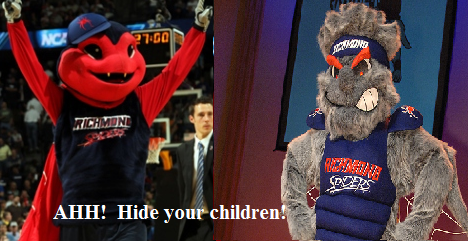 Which Muskies team will show up tonight? The one that played solid for 40 minutes against Dayton on Wednesday, or the one that struggled on the road last week at Charlotte and St. Joe's?

The bad news is, unlike their hideous mascots (new or old), their team looks good. At least at home. The Spiders are 11-1 at home, including a win over VCU last week. The Spiders are not a great defensive team though and don't really rebound well either. Even still, Vegas has Richmond as a 3 point favorite with big man Derrick Williams expected to return from an injury tonight. Will the Muskies shake the road game jitters? At 5-2 and tied for 1st in the A10 with VCU, the Muskies control their own destiny with 9 conference game to go.