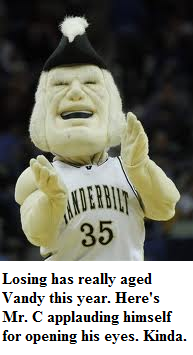 It's "White Out" night. Everyone gets a white Xavier shirt at the game tonight. If you can't make it, tune in to ESPNU for the 7:30 tip.

Vanderbilt, like Xavier, lost most of their top players after last season. The Commodores aren't handling their recovery quite as well as the Muskies have thus far. Their record is 2-4 without having played any great teams. Their bright spots are at guard, as Kedren Johnson (16.7 ppg) and Kyle Fuller (11.3 ppg) lead the team in scoring, although they also average as many turnovers as assists each game. Overall, it's not looking good for Vandy; they are scoring just 58 pts/gm, 322nd in the nation and averaging less than 10 assists a game, 325th in the nation! If you're curious, there are a total of 347 teams in Division 1 basketball.

This is a game that Xavier should win. But we all know that doesn't mean it will happen. With the youth on this team and the rebounding woes of late, nothing is a certainty. Let's hope the Muskies can put together a solid 40 minutes and improve to 7-1.