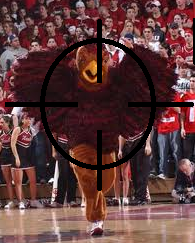 Before we get into the numbers, let's talk about how annoying the Hawk is... For those of you who may not know, St. Joe's mascot is a hawk who flaps his wings non-stop during every basketball game. He also does annoying figure eights on the court during timeouts. The Hawk flaps about 3,500 times during a game and has been at every game since the idea came about in 1956. That's annoying consistent.

The fans chant "The Hawk Never Dies" at games. Check out how the Temple students treated the Hawk last time they played. They held a funeral for the Hawk! It was well done...caskets, everyone in black, kudos to them.
http://rivals.yahoo.com/ncaa/basketball/blog/the_dagger/post/Temple-students-throw-a-funeral-for-the-St-Jose?urn=ncaab-324802
But I must say, the Owls have a problem with the Hawks? Isn't that just the pot calling the kettle black? These schools are for the birds. (Bird pun!)

This should be a stiffer test for the Muskies than their last couple games. Joe's has 4 guys averaging 10+ pts/game, including 2 of the highest scoring players in the A10, Jones at 17ppg and Galloway at 16ppg. A Junior and a Sophomore, (also no Seniors on the team this year)....not good for the rest of the A10 next year.

Let's put together a full 40 minutes of solid play and tough defense and get the win! Go Muskies!!!