Crosstown Shootout moves to USBank Arena for next 2 years 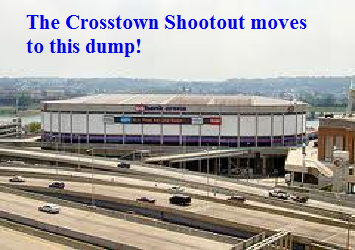 We may never know exactly why this move has happened.  Was it entirely because the schools wanted to show the fans that they are trying to improve the atmosphere of this event?  Was it for safety reasons?  Was it for money?  It's probably some combination of those but it's a bad move regardless of the reasons.

This is a college rivalry.  It should be played on the college campuses!  Every year for 25 years in a row it has been done this way.  We know that the coaches, referees, and players will be ultra-aware of what's happened during the next Shootout.  There's no way there will be a fight between the players so changing the venue doesn't change that.  And moving it to USBank makes there a GREATER chance for problems among fans.  When less than 5% of the crowd is one fan base, they are going to avoid altercations with the home crowd for the most part.  When there are 8,000 fans from each side and some of them have spent all day getting drunk at the Banks bars and restaurants leading up to the game, there is the potential for a lot to go wrong.

The schools have handled this all wrong for the reasons above and more.  Now that we are in this "wait and see" period of 2 years at USBank, we are keeping the focus on the fight and the ugliness of the rivalry.  Everyone going to the games, watching them on TV, and reading articles about them will be reminded that these games were moved here because of the fight, whether or not that was the sole reason. (Thanks in advance to the media for continuing to mention this in the future.)  Instead of refocusing and putting the fight in the past, this will only keep reminding everyone of it.  Why not ask players, students, coaches, etc from both schools to volunteer together in the community and show that we are all bigger than this?  Nope, it seems that the only things happening are reactionary changes that are just being made to be made and they don't make sense.

Oh, and a final thought.  USBank Arena is a dump.  These are the two biggest athletic programs in the area.  They put money into their sports facilities so that fans and players can enjoy big-time games like this one in those facilities, not have to go pay some 3rd party to watch their teams.  And, if security is really an issue, why are you moving it to be handled by the USBank Arena staff who have not be in charge of handling a Crosstown Shootout for the last 25 years???

Okay, had to get that off my chest.