Time to get crazy Xavier Nation! 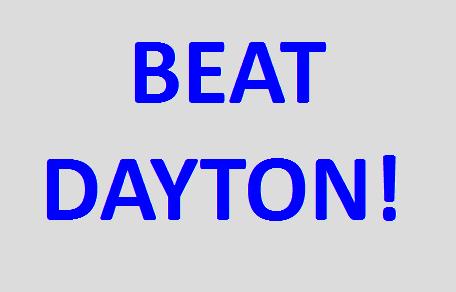 The current 2-game slide hurts and while the postseason is not looking probable right now, there's nothing that would feel better than to beat Dayton at home tomorrow night.

Dayton has had some ups and down this season. As of now, they are not a tourney-caliber team but they aren't real far off. Their 3 conference losses are to arguably the best 3 A10 teams. Some solid wins and a good finish in the A10 would likely get them to the big tourney. The good news is that Dayton is just 1-3 in true road games (although note that they played mostly good teams on the road, beating Alabama and losing to USC, LaSalle, and VCU). As was the case last year, their best player is PG Kevin Dillard, who leads the Flyers with 14.9 ppg and 4.8 apg.

As I'm sure you already know, the Muskies haven't lost to the Flyers in Cincinnati since the 1980-81 season. Semaj Christon grew up in Cincy so this rivalry is not new to him. Let's keep the streak alive! We need every Xavier fan to be as loud as possible in Cintas tomorrow night! 9:00 tip-off so let's get a late night victory everybody!

I have heard @B_RadXU12 says that if this gets 1,000 RTs he will shave his head for his former teammate @hughes_33 who is battling cancer!