Xavier takes on Pacific as 1st game in Anaheim Classic 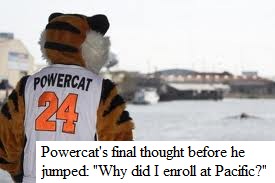 Forget football, the Muskies play at 2:00 on Thanksgiving Day! Pop on ESPNU and work up an appetite cheering for Xavier.

The Muskies take on the hapless Pacific Tigers, who are 1-2 this year and have yet to defeat a Division 1 team. Their win was against Holy Names. That's the actual name of team they played, according to ESPN.com (don't believe me? look http://espn.go.com/mens-college-basketball/team/schedule/_/id/279/pacific-tigers)!

Pacific has 3 guys with good size in the paint, one 6'10" and two 6'11". They don't have any one big-time scoring threat, it's more of a balanced attack, guard Lorenzo McCloud and forward Ross Riveria average double-digits scoring but five others average 5 points or more. They use their full roster each night, with 11 guys averaging double-digit minutes each game.

Isaiah Philmore will be eligible for this game. Let's hope he shakes off the rust and Semaj Christon and Dee Davis cut down on the turnovers compared to the RMU game.