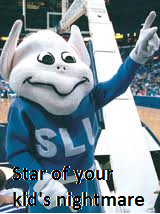 So, what the heck is a Billiken?  Some teacher in St. Louis invented the Billiken as a charm doll in 1908 as she claimed the figure came to her in a dream (more like a nightmare).  The doll was a fad and soon enough, just like coach Rick Majerus, it was no longer popular in America.  Apparently, SLU is hoping the fad will come back again.  There aren't many mascots that could look more creepy than this alien-monster hybrid.  Are there "No Billiken Zones" marked off for parents to bring their kids to the game?  Jeeze, this guy is the definition of creepy.